A Favourite Christmas Wish - For You 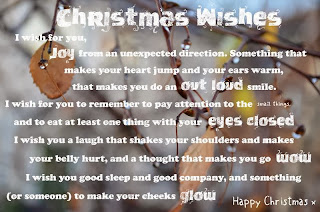 We hope you have a safe holiday season and may all of your wishes come true!

From our families to yours Happy Holidays and Merry Christmas

Have a great day!!

Our New Address is

The information contained in this email is confidential. If you are not the intended recipient, you may not disclose or use the information in this email in any way and should destroy any copies. Oac Mortgages Inc. does not guarantee the integrity of any emails or attached files.

There have been a number of positive reports, and articles written recently about the current housing market, this one below is one of the best. Some very good numbers to share, have a quick read:

Canadian condominium construction has surged but population growth has kept oversupply in check, the federal housing agency said in a report on Wednesday that also showed declining mortgage arrears and high home-equity levels.

In its annual report on the housing market, the Canada Mortgage and Housing Corp pointed to steady mortgage debt and an increasing number of households as evidence that residential real estate is in good shape, despite warnings from observers that the market is overheated.

Canada’s housing market avoided the crash experienced in the United States five years ago, due in part to more conservative lending standards and a stronger economy. While economists have long predicted an eventual correction in Canada, they are divided over whether prices will drop sharply or simply stagnate in a so-called soft landing scenario.

The agency’s report showed some 41% of homeowners have no mortgage, while the rest typically have solid equity levels, accelerated mortgage payments or declining arrears.

About 31% of recent buyers made lump-sum payments or increased their regular payment in 2012 to pay off their mortgage sooner, and 44% had their payment set above the minimum, the report showed.

The average amount of equity for homeowners with mortgages was 47%, and 71% have at least 25% equity in their home. Only 7% had less than 10% equity as of April 2013, suggesting only about 7% of homeowners would be “under water” if prices dropped more than 10%.

With the once-booming but cooling condominium market widely perceived to be the weak spot in Canada’s urban housing market, the CMHC said condo construction was far outpacing construction of detached homes. Even so, there were no signs of oversupply yet because of the growing population, mostly because of a strong influx of immigrants and an increase in the number of people living alone.

The surge was most notable in Canada’s biggest cities, where cranes dot the skylines and tens of thousands of new units come on line every year. The share of condominium starts out of total starts was highest in Vancouver at 64%, followed by Toronto at 59% and Montréal at 58%.

While the number of starts suggests huge supply in the pipeline that will come to the market in the next year or two, the building boom has begun to slow and CMHC said inventories so far are not above historical levels.

Housing starts began moderating in the last half of 2012 and the first quarter of 2013, with multiple-dwelling starts declining for three straight quarters before rising modestly in the second quarter of 2013.

CHMC said population growth and a shift in the way people are living suggests the demand for smaller housing, including condos, will grow.

“As a consequence of population aging and the increased tendency to live alone, one-person households are expected to show the fastest pace of growth to 2036, making it the single biggest type of household by the 2020s,” CHMC said.

It seems there's just no shaking Canadians' faith in real estate. There was more proof of that over the past week.

The latest report from Statistics Canada shows that the rate of household debt to income has topped-out again. It hit nearly 164% for the third quarter of 2013. Most of that is mortgage debt, which rose 1.8% and now stands at $1.13 Trillion.

The Bank of Canada and the Finance Minister continue to call the high level of indebtedness the single biggest domestic threat to the economy, but Canadian consumers don't seem worried. The latest read on consumer confidence by Bloomberg-Nanos shows an increase to 59.3, up from 58.9 a week earlier. Pollster Nik Nanos says most of that is based on a positive view of real estate.

Consumer confidence is getting some support from a forecast by one of Canada's biggest credit union cooperatives. Citing an expanding population and a contracting supply of development land, it expects the price of housing in the country's biggest market, Toronto, to double over the next 25 years.

How to Fix Errors on Your Credit Report

Mortgage lenders give their best rates to customers with the highest credit scores. But what if your credit score is low because of errors on your credit report? The best way to prevent this is to check your report regularly—especially when you’re thinking about buying—and correct any errors.

Not only can checking your credit report potentially increase your credit score, it can also detect and prevent any attempts to steal your identity. As your mortgage advisor, remember that I’m always here to help with any questions you might have about your credit or your mortgage.