There really only appears to be 3 changes:

Change #1, he has increased the qualifying rate for variable rate mortgages from the current 3 year posted to 5 years…

Really all that they are doing is trying to stop people getting in over their heads with these ultra low rates, and make sure the mortgages are sustainable when rates eventually increase.

The effect of the change is even less with some of our other lenders like Macquarie, and First National who do not have separate posted and discounted rates…

Change #2 For mortgage refinances, this one is going to hurt a little…. CMHC has just announced the removal of 95% FINANCING ON REFINANCES, they have reduced the maximum mortgage to 90% on refinances. This will affect a significant number of clients looking to clear their debts.

CMHC is getting out of the rental property business. They no longer want to insure non owner occupied properties.

This is a significant change for those purchasing rentals with minimal down payments.

What we are waiting for is the ripple effect with the lenders. No lenders have officially changed yet, but we expect announcements to follow today. What we are really going to be curious about is if GENWORTH follows with these changes or may lag with the changes to pick up a quick boost of market share.

Either way, the message is clear, lending is tightening up, if you think you might need to redo your mortgage and your new mortgage amount is any where near the 90-95% value range get your application in now, today.

After consulting with major Canadian lenders, Flaherty outlined the latest weapons at Ottawa's disposal aimed at removing some of the speculative froth in the housing market.

"There is no evidence of a housing bubble, but we're taking prudent steps today to prevent one," he said at a news conference in Ottawa. "If some lenders aren't willing to act themselves, we will act."

First, Ottawa will require that all borrowers meet the standards for a five-year fixed-rate mortgage, even if they choose a variable mortgage with a lower rate or a shorter term.

"This will guard against higher rates in the future," Flaherty said.

Second, the rules would lower the maximum Canadians can withdraw when refinancing their mortgages to 90 per cent of the value of their home, from 95 per cent.

And finally, Ottawa will now require a minimum 20 per cent down payment to qualify for CMHC insurance for non-owner-occupied properties purchased as an investment.

The last rule is aimed at reining in would-be real estate speculators who own multiple properties beyond their primary residence.

For the last 2 weeks there have been discussions by Jim Flaherty and CMHC to consider making some significant changes to tighten up lending policies.

The following information was taken from the above link.

Ottawa is considering new rules that would force banks to use tougher criteria to evaluate mortgage borrowers, a move to ensure that consumers aren't taking on more debt than they can handle when they buy a home.

The key proposal under discussion would see the creation of new conditions the banks would have to follow when determining whether a customer can afford a mortgage, according to sources. Those rules would require banks to consider whether a person who takes out a variable-rate mortgage on a home can continue to make the payments if interest rates were to go up significantly.

Finance Minister Jim Flaherty is under pressure from a number of experts, including executives of major Canadian banks, to take action in the face of surprising strength in the country's housing market, which shows no signs of letting up. The fear is that many of the borrowers who are buying homes because of unusually low mortgage rates will struggle with their monthly payments when interest rates rise. That could have a dampening effect on the broader economy by prompting consumers to cut back their spending as they direct all their money toward their mortgages.

Senior bankers have privately urged government officials to increase the minimum down payment on homes from 5 per cent, or shorten the maximum time over which borrowers can spread out their payments, which is currently 35 years.

Mr. Flaherty and officials within the Finance Department and Canada Mortgage and Housing Corp. have been meeting with various players in the mortgage industry to consider options.

I think that ideally, they would like to cool down the real estate market, but fear that any significant intervention would “Burst the Housing Bubble”.

By implementing the doubling of the minimum down payment, from 5% – 10%, it would eliminate a significant portion of the 1st time home buyers.

I am seeing a lot ideas and speculation as to what people think they should do, however I read some stats about what the percentage of recent mortgages fell under the 5% down category.

I don’t think we will see the removal of 5% down all together.

I recently read one possible solution was to create a tiered program:

This idea I like, and think it would satisfy the lenders concern about 95% financing on the “Mega” mortgages, but maintain the options for the first time homebuyers.

But it is not up to me; maybe someone should forward my email to Jim Flaherty.

Now keep in mind these are all speculations, but what my 20 years experience in the industry has shown, is that when rumors start, in our industry, some portion of the rumor often comes true.

So what I am trying to say is that we have clearly reached an apex with regards to mortgage lending….. Up until know the lenders were competing for market share by loosening policies. Stated Income, lower beacon score approvals, not requiring Notice of assessments for self employed individuals….. etc. Those days are done.

I am already seeing this today, with lenders reluctance to approve exceptions on files.
Rates are still holding steady, but best Variable is still Prime -.30% and the best 5 year fixed is 3.69% if we can close in 30 days.

If you have any possibility of requiring a mortgage now or in the near future, please give me a call. Don’t wait; your property could be approaching its maximum value, giving you options today that may not be there in the future.

“Equity to renovate your home”

“Equity to create a downpayment to be able to buy a new home.”

Today I received a letter from Habitat for Humanity Family Selection Committee about their homes being built in 2010. These homes will be built in partnership with low income families so that they may work toward home ownership.

The purpose of this email is to ask you to display or distribute the attached flyer to individuals whom you believe would be interested in, and who may potentially qualify for a Habitat for Humanity home.

For a low income family the opportunity we have had to own a home may never be possible without the help of Habitat for Humanity. 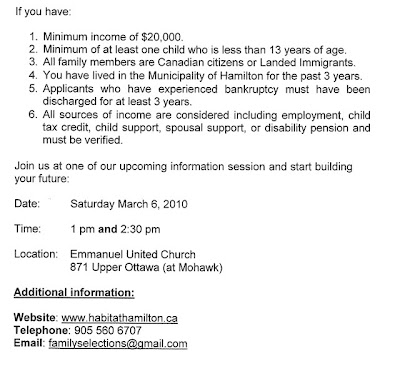 Posted by Lisette Amalfi, AMP No comments:
Email ThisBlogThis!Share to TwitterShare to FacebookShare to Pinterest
Labels: Habitat for Humanity

The Bank of Canada is expected to raise its benchmark interest rate in the summer of 2010. The only question remains is how much and how fast. That is only 6 months away and this will have a major impact on all lending rates including mortgages, lines of credit and maybe even credit cards. Now is the time to reexamine all your debts and financial situation.

Having a prudent financial mortgage expert working on your behalf is the best defense against rising interest costs. The decision you make over the next couple of months regarding your mortgage and other debts will have a major impact on your financial future.

Call me today and find out what options are available to you. Don’t be left not knowing because money is cheap today but won’t be for long.

Resource of the Month...

Here’s an opportunity to consult with a top-notch Real Estate Company, without any cost or obligation!

With another year behind us, this is a perfect time to start thinking about moving into the home of your dreams. Do you know how much your current home is worth? Do you know what similar homes in the area have sold for? These are the kinds of questions you need answers to before you start looking for your new home!

That’s why we strongly recommend that you call Fred and Marilyn Amalfi with Coldwell Banker Amalfi Realty, for a Free, No Obligation, Home Evaluation. They will help you get ready for the market with a CMA (Comparable Market Analysis) and the expert advice you need to get your home ready to sell. With over 37 years experience in the real estate industry they are the top choice!

Call Fred or Marilyn today to book your consultation! 905-628-1777 or email them at amalfi@coldwellbanker.ca.
Posted by Lisette Amalfi, AMP No comments:
Email ThisBlogThis!Share to TwitterShare to FacebookShare to Pinterest
Labels: Resource of the month
Newer Posts Older Posts Home
Subscribe to: Posts (Atom)